At one time, three wheeled scooters were an oddity.

But the last decade has seen these once niche bikes galvanise into an important subset of the industry.

The simple truth is this – they’re safer.

Life-long two wheelers (like myself) will tell you they’re unwilling to let go the sensation of speed and fine control that comes from traditional motorcycle riding.

But the way modern three wheel scooters corner (thanks to their unique front suspension system) is a sensation that everyone should check out at least once.

Each wheel has individual suspension, meaning these scooters lean into corners much like a traditional motorcycle.

At a Glance – Our Seven Best 3 Wheel Scooters

We’ve made a list of some of the more interesting models in the UK for you to check out. 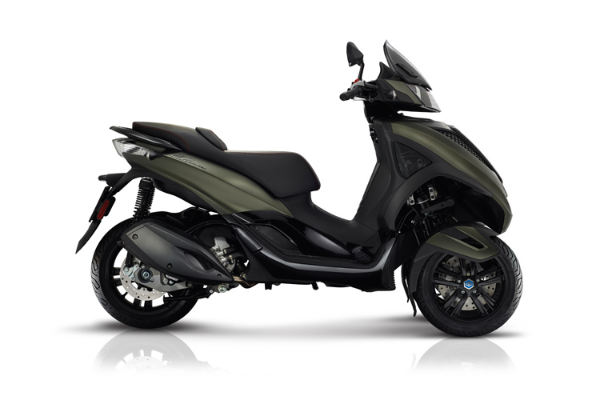 These are becoming a pretty common sight on UK roads – with good reason.

The LT 300 is essentially a lighter version of Piaggio’s more maxi-styled MP3 350 and 500 models.

Stripping back some of that power has also made this bike more nimble.

It’s better suited to urban driving than it’s larger cousins, but absolutely has enough grunt for some light touring with a pillion passenger.

A lot of thought has gone into making this a comfortable experience for rider and passenger.

Decent storage and a comprehensive LCD instrument panel round out this practical three-wheeler. 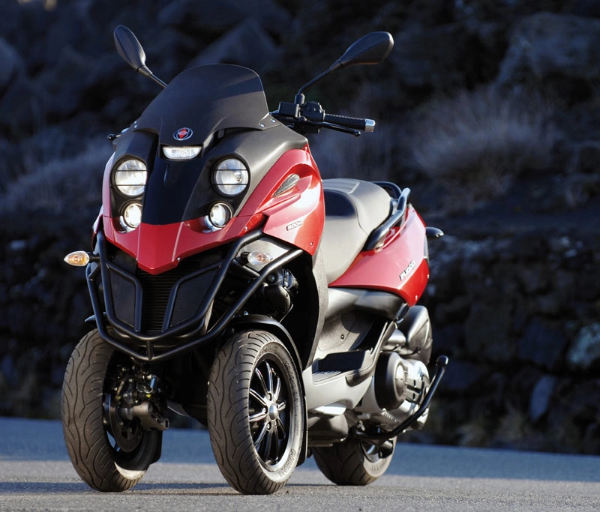 Piaggio have been manufacturing the Gilera Fuoco for almost 15 years now, and every iteration has brought subtle improvements.

This bike is no lightweight urban commuter.

It’s maxi-powerful, making it an ideal tourer – yet compact enough to fit into traffic.

The build quality here is what you’d expect from Piaggio – everything looks, sounds and feels premium.

The engine is a tried and tested unit, featured in other Gilera bikes.

Corners are a particular delight on these machines – once you get your head around the fact that they lean and counter steer in a similar way to their two-wheeled counterparts.

As you’d expect from a three wheeled scooter, under-seat storage is ample – more than enough for a weekend away. 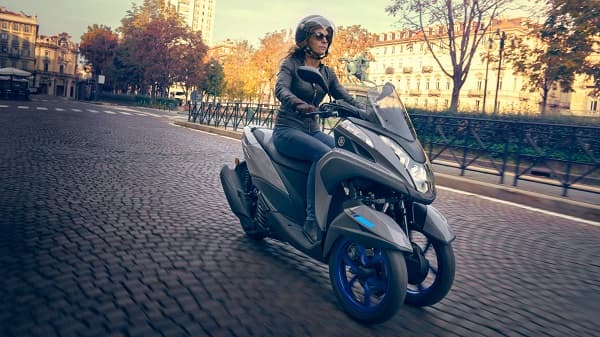 The tricity 125 is a learner friendly three-wheeler with a clear emphasis on urban riding.

It’s not the most powerful bike on our list by any means, but has decent acceleration for nipping around the city.

Excellent handling and an effective, unified braking system explain why this is one of the most commonly seen three-wheeled commuters on the UK market. 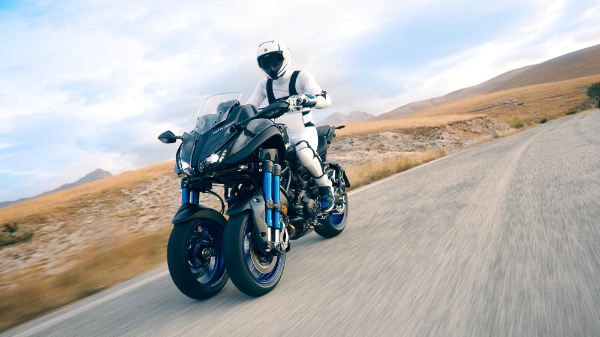 The manufacturer’s copy for this model refers to how it “carves” through corners.

It sounds like a bold claim, but watching videos of these things on twisty mountain roads made me question my initial skepticism,

This is easily the most powerful three-wheeler on our list and is absolutely not intended for beginners.

It’s high torque and relatively lightweight, so the performance here is sporty to say the least.

Weight distribution, riding position and comfort are what you’d expect from Yamaha – excellent.

Dual upside down forks with individual suspension mean the feeling of contact with the road is incomparable to regular two-wheeled motorcycles.

This is geared towards experienced riders who want the safety of a three-wheeler while keeping the power, torque and speed of a traditional sports bike.

Storage is minimal, as it’s not a step-through type scooter.

Panniers and top boxes are available. 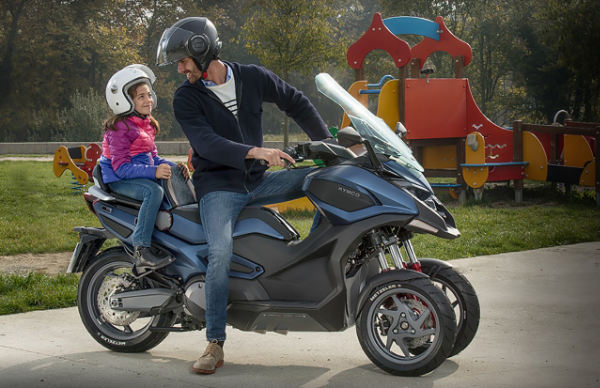 This one hasn’t hit the market yet, but we wanted to include it because we’ve had so much experience with this manufacturer.

I’ve ridden their KTR 150 model a bunch and concluded that it’s bombproof.

The CV3 is a bit of a departure for the company.

A 550cc twin engine should provide plenty of power for touring, and the seating arrangement looks like a comfortable recliner.

Storage is ample and Kymco has been showing off various panniers and top boxes at trade shows.

These are just about to hit the market, and seeing how they are priced will be interesting.

Kymco are trying to get a foothold in the UK market and will probably aim for a pretty competitive price point. 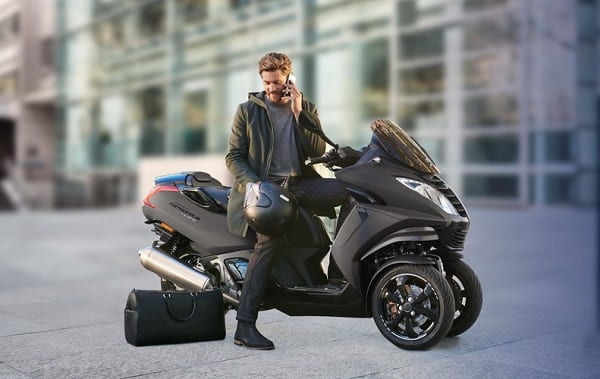 At this point those ubiquitous “Your car is missing a wheel” comments start to cut close to the bone.

The Metropolis leans into the “three wheeled car “ idea by borrowing aesthetics and lines from classic Peugeot cars – not for everybody but undeniably unique-looking.

At 400cc this scooter is a capable tourer as well as a commuter.

It’s on the larger side though.

We haven’t tried one firsthand, but reckon it might be a tight squeeze in some traffic situations.

ABS and a traction control system make this feel like a safe and secure riding experience on the open road though.

Footage of these things handling twisty mountain routes is impressive.

Storage is excellent here and some models come with a top box installed – great for touring.

This is aimed at someone who wants maximum comfort and security, without sacrificing too much power. 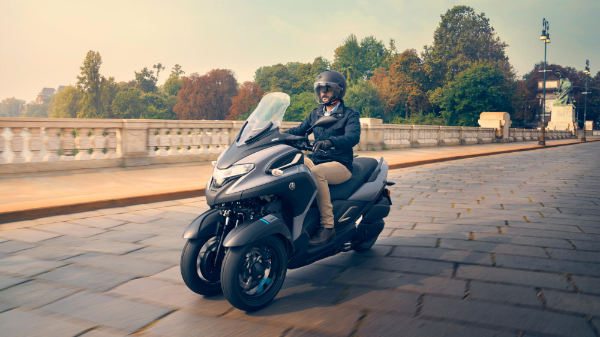 Yamaha’s Tricity series has a focus on urban agility.

The 300 steps up the power, but gives the same smooth, predictable performance of it’s smaller cousin.

This bike also features a narrow front wheel arrangement to take advantage of gaps in traffic.

Don’t get us wrong.

But they’re slimmer than some other three-wheelers on the list, and are easier to maneuver in traffic.

This isn’t a light 300cc, and though it’s comfortable and capable of long rides – it isn’t especially fast.

And like the Tricity 125 there’s no accessible storage while you’re riding.

It’s genuinely difficult to tip one of these things over.

That’s why they appeal to many learners, or those with a car license considering a runaround for daily use.

We can recommend them to both of these categories of people.

But whatever the legal requirements, basic CBT training is a good idea – even if you have years of car driving under your belt.

All images from manufacturers website: linked and credited in article.