Motorcycle Filtering: A Guide To The Law And Staying Shiny Side Up 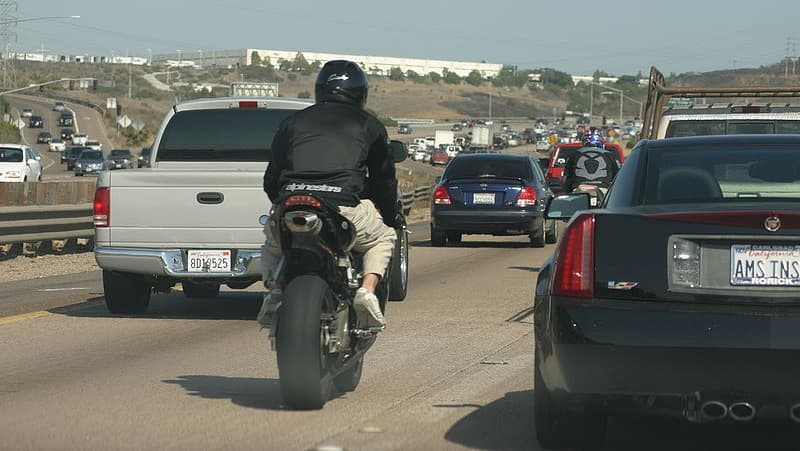 Filtering or lane splitting is the fine art of threading your motorcycle between traffic to make progress.

One of the biggest perks us riders get on the road is our ability to continue on when traffic begins to build up and needless to say it comes with numerous benefits:

You’ll also be glad to hear filtering is a legal practice in the UK and when done with care it can be a reasonably safe manoeuvre, however, it is not without risk.

There are potential dangers involved and not all of them blindingly obvious. You should make every effort to reduce your risk of injury or accident and be aware you may be leaving yourself legally vulnerable should an insurance claim need to be made.

Safety Warning: Expect hazards to crop up and as always ride as if you are invisible – never rely on other drivers to have seen you.

What does the highway code say?

If you’re riding a motorcycle on the road you already know that the highway code covers the rules and guidelines all road users are expected to follow.

Some rules are a matter of criminal law (most often where MUST/ MUST NOT are written) and punishable by fines or jail time, others are open to interpretation but may be prosecutable in certain circumstances.

Rule 88 looks at Maneuvering, it mentions filtering and gives a clear indication that filtering is considered within the highway code;

“You should be aware of what is behind and to the sides before maneuvering. Look behind you; use mirrors if they are fitted. When in traffic queues look out for pedestrians crossing between vehicles and vehicles emerging from junctions or changing lanes. Position yourself so that drivers in front can see you in their mirrors. Additionally, when filtering in slow-moving traffic, take care and keep your speed low. [1]

However there is a very clear illustration of a driver spotting a motorcyclist directly underneath this rule, indicating this is one of the things they expect road users to look out for.

A subsection of rule 160 related to behavior and observation of a vehicle once moving states;

“Be aware of other road users, especially cycles and motorcycles who may be filtering through the traffic.” [3]

An excerpt related to how you should not filter coming up to a crossing;

The highway code clearly makes specific provisions for both motorcyclists and cyclists to filter.

There is however no clear mention of entitlement to filter and no expectation should be made of other road users to allow you to filter.

In addition, there is no clear mention of the status of filtering over roundabouts, which is generally something you’d look to avoid.

What does the law say?

There are no filtering specific laws to define its legal status explicitly, however, because filtering is made allowance for within the highway code we can take that as it’s defined allowance on the public road within the UK.

That is not to say it could not be seen as dangerous or negligent driving.

In terms of your legal liability however there are several key civil cases to consider.

The following cases are commonly mentioned when it comes to rulings on accidents involving filtering motorcyclists, it is not exhaustive and aims to give a very brief overview.

You can see further information about these cases and others here.

Motorcyclist filtering on left (undertaking) when car pulls out from the left. Motorcyclist 50% at fault – had they not been undertaking this may have gone in their favour.

Motorcyclist filtering past stationary traffic when a car goes to make a u-turn and pulls into their path, Car driver found 100% at fault.

Motorcyclist filtering past stationary traffic when a car goes to turn right into a residential property, Motorcyclist found 80% at fault – due to speed.

Motorcyclist filtering around a tractor trailer when a bus pulls out from a road on the left, Motorcyclist found 50% at fault – ruled they should have been going slower.

Motorcyclist filtering past stationary traffic when a car pulls across their path from a side road, Motorcyclist found 33% at fault.

Summary of the law

There is nothing legally to prevent you filtering as has already been mentioned – it is not a criminal offence.

In the event of an accident however the portion of blame you are assigned depends heavily on numerous factors and there is no clear precedent which would inspire confidence of an easy ruling in your favour should the worst happen.

Overwhelmingly in these cases motorcyclists are involved in overtaking vehicles obscuring the view of a side road without anticipating that a car may pull out from this road.

If there is a lesson to learn from this it’s that if you cannot see the full picture of what is developing ahead of you slow down and prepare to stop within the distance that is visible.

Observations before moving off

Check your mirrors and do a shoulder check, other motorcyclists may be filtering already.

Look down the road to see if there is enough room for you to navigate between the cars and get back over safely.

Check for debris which may have collected in the centre of the road.

Continue to monitor the situation once you’ve moved into position.

Look what is happening in front of you and plan your route.

Scan well ahead for safe stopping points and keep an eye out for anything happening behind you such as another motorcyclist filtering (remember ride your own ride and don’t allow them to pressure you to go faster or do anything dangerous).

Hazard perception is often forgotten post theory test but when filtering on a motorcycle it is an invaluable tool and you should constantly scan for hazards:

Speed is a crucial factor when it comes to filtering, it has a profound effect on your ability to react to a developing situation or slam on the anchors to guarantee the safety of you and the shiny parts of your bike.

Don’t exceed a speed that would allow you to safely stop should the situation demand it.

Just because you can doesn’t mean you should

It’s easy to become impatient in traffic but before filtering you should honestly weigh up if it’s even worth it, is it going to pay dividends to filter past 2 cars given that light has been red a while and probably about to turn green? Probably not.

While filtering is a great tool to have using it at every available opportunity is liable to increase your risk of having an accident.

As previously stated you can filter on zigzags provided you don’t filter past the car at the head of the traffic. However, this doesn’t make it a good idea as pedestrians are liable to cross between cars at these points leading to a high risk of a collision.

Ideally you should avoid filtering on zigzags where possible however if you do decide to take this on you should be painfully aware of any pedestrians you or may not be able to see.

It’d be nice to say we could all act like civil adults and share the road but one of the biggest dangers you’ll encounter on the roads is other drivers.

Everyone should be aware of and watch out for angry drivers often peeved at an imagined “queue jump” or some other such faulty logic.

I’ve seen all sorts of childish behaviour from drivers as a reaction to motorcyclists filtering (myself and others) such as pulling across the centre lane to prevent progress, shouting, beeping and even once punching a passing moped rider.

Watch out, be careful and don’t get involved in any confrontation.

If you feel threatened by a driver’s actions towards yourself, you should get yourself to safety and report it to the police on the non-emergency line.

I’ve done it, he’s done it, we’ve all done it. If you hit a mirror stop and talk to the driver to assess the damage and what they want to do. Often there’s no damage and a simple apology is all that’s needed to resolve the situation amicably.

A study conducted by Belgium Research firm Transport and Mobility Leuven in 2011 found that within the population of their study if 10% of car owners switched to motorcycles that time loss for all road users as a result of congestion would reduce by 40%.

In addition, emissions could be cut by 6% through these car owners switching to motorcycles creating a clear societal benefit for allowing motorcyclists to filter and encouraging the population to take up motorcycling particularly as a means of commuting.[6]

To put it in more visual terms: Imagine how much worse congestion might be if everyone in Hanoi sold their motorcycles, scooters and bicycles and bought cars

If you feel you would benefit from further training there are numerous advanced rider qualifications such as RoSPA, Bikesafe, IAM, ERS and BMF Blue Riband which will contain elements of safer filtering.

In addition to this all good motorcycle training schools can provide lessons suited to your needs and will be happy to focus on areas such as safe filtering.

Disclosure: “As an Amazon Associate I earn from qualifying purchases.”