We’ve all seen that rider with the suspiciously small plate tacked onto the back of their bike – often so small as to be almost illegible.

But did you know he is actually breaking the law?

There are very clear laws governing the size of motorcycle license plates, and the smaller ones you see are generally illegal.

The law is actually pretty complicated, so read on and avoid that awkward conversation at the side of the road with the local constabulary.

What does the law say?

For bikes registered on or after September 1st, 2001 motorcycle registration plates must only be displayed on the back of the motorcycle.

For older models, you can also put one on the front, but you don’t have to.

If you ride without proper plates, you may be fined up to £1,000 and your bike can fail its MOT. If you’ve got a personal plate, that can be taken from you at your own expense.

Many garages, however, will turn a blind eye to a small plate as long as you can produce the correct size one when you bring your bike in for an MOT or other work. However, this isn’t strictly legal and is only anecdotal as far as this author is concerned.

Your motorcycle license plate should read as follows:

Rear bike plates also have to feature black text on a yellow background with no pattern and be made of reflective material. The text can have a ‘3D effect’ though if you fancy.

How big does a motorcycle plate have to be?

Since 2001, the characters on your plate must be 64mm tall and 44mm wide with the exception of the number 1 or letter I.

There’s no official ruling on how big the plate itself has to be, as long as it contains letters of the correct size. The standard plate size, however, is 229x178mm (9x7in).

You might be thinking you could get away with a smaller plate if your registration contains loads of Is and 1s – and you’d be right. But spare a thought for people with lots of 7s and Ms.

Bikes registered before September 1st, 2001 can display text over three lines if they like, but it’s against the law to have a one-line plate, no matter what. (Source)

Can a number plate be decorated in any way?

Not really, is the short answer. You have to have a plain yellow background, but certain flags or country markings are allowed, as follows, as long as they don’t exceed 50mm in width and are on the left side of the plate.

Furthermore, if you travel in Europe it’s also possible to have your plate display your country of origin, in one of the following formats:

It’s also possible to have a border or slogan on your plate, which often shows the dealer you bought the bike from.

You’re not allowed to be creative with bolts to change the appearance of any letters, and you could even get in trouble if your plate’s too dirty to read.

Common sense, as in so many things, is key.

As far as we can tell side-mounted number plates are legal providing they meet all the standard criteria. That is; they have the correct letter sizing and are clearly visible and unobstructed.

There is nothing specifically mentioned in the legislation regarding side mounting plates so make sure it is the correct size and you should be fine.

I’ve seen plates with silver or white text on a black background – why? 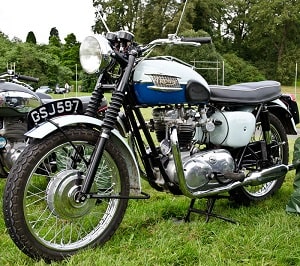 Bikes registered before 1 January 1973 can show those lovely looking ’black and white’ plates – although the text can be white, grey or silver.

Since April 2016, vehicles registered before 1 January 1976 can display the older style plates as long as it’s been applied for through the DVLA and registered as a ‘historic vehicle’ for tax.

If you see a modern bike with a black and white plate, it’s probably not legal and the rider is taking a risk if he ever gets pulled on it.

Where can I get a custom, but still legal, plate made up?

There are loads of places online you can get custom plates put together – we like this company on Amazon. Fully legal, Simple, quick and easy.

There are also options for more decorative plates;

Many companies offer UK legal plates and you can also get weird and wacky plates cut into different shapes – perfect for decorating a garage wall, but not so much for identifying your bike.

Private number plates and the law

So now you know the ins and outs of the shape, size, and information required to have a legal number plate, what if you want a private plate on your motorcycle?

It is also perfectly legal to transfer a private plate from a car to a motorcycle and vice versa if you so wish provided you go through the correct channels.

Your private plate must conform to all the legal standards that your original plate adheres to and you must have the private plate transferred to your vehicle, to replace the existing one.

All UK private registration plates must be registered with the DVLA, conform with their regulations and can only be applied to motorcycles that are registered or about to be in mainland Britain.

If you are looking for a personalised number plate, check out Car Reg, they will supply the DVLA certificate of entitlement and make up a number plate that conforms to the legal standard required.

‘HOG 55S’ is a particular favourite and might still be available; you can browse the full range here.

A personalised plate can be a great way to give your bike some personality, motorcycles are traditionally custom machines that owners want to make their own and a private reg can certainly do that.

How do I transfer a private registration plate?

If the private plate is already on a vehicle then you will need to fill out a V317 form, submit it with the required documents for both of the involved vehicles and pay the transfer fee.

You will also need to make sure both vehicles are taxed and MOT’d where applicable so that if required they can be moved for the DVLA to check them.

If the private plate is not already on a vehicle and is instead on a V778 Retention Document or V750 certificate of entitlement you can assign the plate directly to your motorcycle.

If your name is not on the certificate or as a nominee then you will need to change the nominee name. All instructions and fees will be on the relevant certificate.

Many registered dealers will transfer the plate for you to your vehicle when you purchase the plate from them.

The whole process from beginning to the completion of the transfer takes around 2-5 weeks.

You can just as easily remove your private plate from your motorcycle by contacting the DVLA, and transferring it to another vehicle or putting it on retention to use at a later date.

Anecdotal evidence, and my own experience, have found that most police officers don’t really care about the size or contents of your plate.

I’ve run noticeably small ones in the past and been fine for months, only earning a telling-off from an officer once with no other repercussions. But I soon switched it out!

Officers may pull you over for any one of the following motorcycling misdemeanours:

It’s likely that if you’ve only ticked one of those big four, they’ll let you go with a slap on the wrist – however, if you start adding them up it’s much more likely they’ll throw the book at you.

For my money, the benefit of a small plate is purely cosmetic, and it’s not worth running the risk of a big fine just to make your back tyre look a bit bigger.