TomTom Rider 550 Review – Finds the Twisties For You

Nobody likes to stop every 20 minutes to check where they’re going. That’s why companies like TomTom have produced SatNavs for the better part of 40 years.

Recently, demand for systems designed specifically for motorcyclists has risen, and so the supply has increased to match.

This review will focus specifically on the Rider 550 from TomTom- a quad core system packed to the rafters with features. 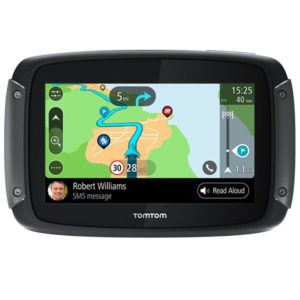 Fast, simple to use and fully featured.

The 550 is a great piece of kit capable of handling anything from day trips to cross-country tours. Check SportsBikeShop

There are two versions of the 550 available- the ‘World’ and ‘Premium.’

The units themselves are identical and offer the same lifetime world maps the only difference is the premium kit includes a few extras:

The difference in price is about £60 quid and the extra security and car mounting options would cost more if purchased individually. At this level of investment, it’s probably wise to go for the Premium option.

TomTom gives its users options; The unit can be hard wired into your motorcycle power source or charged at home. All the necessary cables for either option are included with both the World and Premium kits.

Two mounting systems are included, the pick being the RAM mount which is rugged and reliable.

The 550 Premium also comes with a RAM anti-theft ‘solution’, as they call it, which theoretically means you could leave your SatNav attached to your bike when unattended.

Personally, I wouldn’t leave such an expensive bit of kit in plain sight- no matter the security measures.

This video demonstrates the system’s installation. 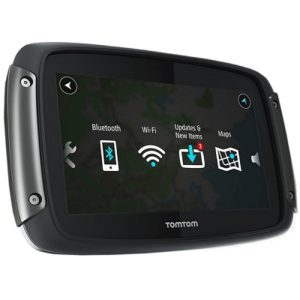 The Rider 550 has built in Wifi connectivity, so you can find and plan routes on the device itself with no need for a computer. It’s far easier, however, to use a PC to manipulate data and download routes and then transfer them to the device.

The 550 can also be paired with a smartphone.

As for updates, the system has a world maps lifetime update guarantee, so your maps will always be current and accurate. 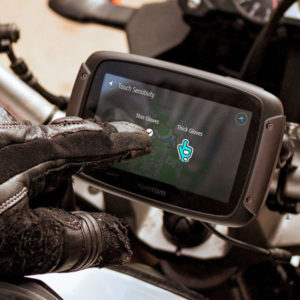 The unit has a 4.3” capacitive touch screen, which can be adjusted in the settings for light or heavy gloves – a very nice touch which allows ease of use all year round.

It is sunlight-readable, and scratch resistant, and when mounted correctly on the bars is easy to read.

With its quad core processor the system is lightning fast, menus are snappy to the touch and there is no lag between commands, scrolling is smooth and glitch free.

Overall this thing is a joy to use, the software is intuitive and everything just “works” when out on the road. 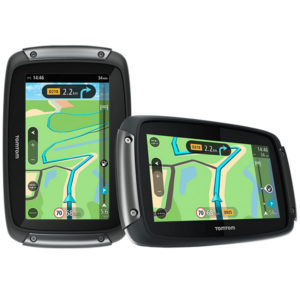 The 550’s primary function is to guide the rider on a manually determined path and to this end the included lifetime subscription to world maps will keep you right.

TomTom have included a few fun extras though.

You can ask the Rider 550 to alter your route to include more bends, more hills, or less motorways. It has a stored database of 1000 points of interest for motorcyclists, that it can integrate into your route seamlessly.

Also, if you’re making a round trip, the Rider 550 can ‘discover’ a new route back from B to A, with very little rider input.

The 550 will find intelligent routes that avoid traffic and road works.

It will warn you of traffic cameras, speed limit changes, and temporary speed traps.

It can even plan your route for you with the MyDrive system and roll all these features into one route that has the optimal level of curves, hills, and straightaways.

You could get your money’s worth out of this thing just by messing around with routes and maps.

You will get around 6 hours use out of a full charge which should cover all but the most epic rides.

The 550 is rated IPX7, which means that it can be dropped into water of a depth up to 3ft, and should still function provided you rescue it promptly. For most riders, this means you won’t have to worry about the 550’s waterproofing, ever.

It’s also scratch resistant and shock resistant- this little machine can take a lot of abuse.

TomTom didn’t scrimp on the features when it came to the Rider 550.

Its compatible with Siri and Google Now and can use voice commands to receive calls and messages, it can even play music.

The 550 sets out to be an all in one package that will suit the needs of any rider.

Does it achieve this goal? In a word- yes.

If you’ve made the decision to invest in a dedicated navigation system for your bike, the Rider 550 is certainly one of the stronger choices on the market.

It overcomes many of the classic pitfalls of SatNavs with its features.

The 550 has an answer for everything the road might throw at it.

Fast, simple to use and fully featured.

The 550 is a great piece of kit capable of handling anything from day trips to cross-country tours. Check SportsBikeShop

If you want to look at some other options see our guide to the best motorcycle Sat Nav.