GT85 vs WD40: Which One Should You Use on Your Motorcycle

Most bikers, at some point, will have come across a need for WD40 or, indeed, a can of GT85 in their riding life.

The two products aren’t just for motorcycles; they are multi-use and have endless uses across cars, bicycles, machinery, and many other things.

Let’s take a look at the two brands and if one really is better than the other. 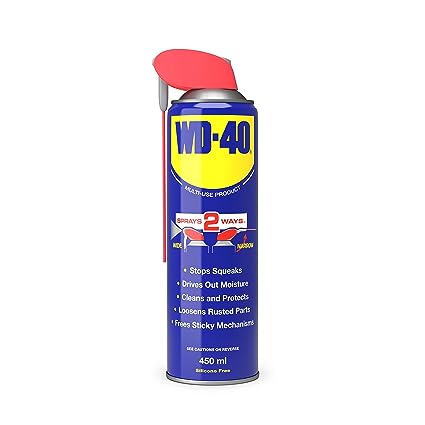 The original WD40 multi-use product has been in production for over 60 years; they perfected the formula after 40 attempts in 1953.

The original formula is still the same as used today.

Rocket Chemical Company were the founders of WD40, and it wasn’t until 1969 that the company changed its name after its leading product, WD40 Company Inc.

Originally it was sent for Industrial use, to be used by Convair, an aerospace contractor who used the product to protect the outer skin of the Atlas Missile from rust and corrosion.

The first aerosol cans of WD40 hit the shelves in 1958 for consumers to use the product at home.

Before this, having seen how well it had worked on the Atlas Missile, workers in the factory had stolen some cans.

It wasn’t long before people realised that the product could be used to both protect and recondition their vehicles.

In 1968 goodwill packages were sent to the U.S soldiers in Vietnam to protect their firearms from moisture.

Some interesting and fun facts from the WD40 website:

The rest, as they say, is history. WD40 is now a worldwide brand, with an estimated 4 out 5 American households owning a can by 1993. 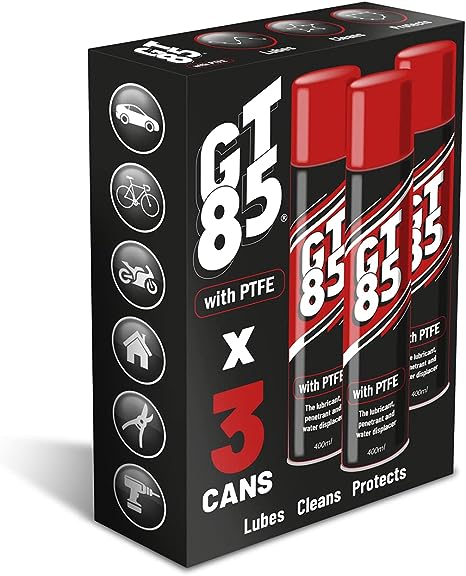 John Chapman was the founder of GT85, and the roots of the company go back to the mid-’80s.

Chapman’s interest came from owning his transport company and knowing the product would be useful for his friends in British Motor Racing.

Alongside a chemist partner, Chapman got to work developing the formula, which included PTFE.

“The added PTFE was designed to reduce friction, wear and energy consumption on components, improving operating efficiency on application.

The final piece of the development process was the inclusion of natural lavender oil, which gave GT85® the pleasant fragrance that has since become distinguishable amongst users.”

That same formula is used today; it remains a resounding success just like it was at the time of its release.

What does it do?

To keep this a fair comparison, we will only look at the Original Multi-Use WD40 and the GT85 Multi-Purpose Spray.

WD40 also offers a range of specialist products, including chain lube and degreaser.

While both products are helpful for many things outside of the realm of motorcycles, we will only be applying and comparing their uses to all things two wheels and sometimes three.

Here are some of the most popular WD40 uses for motorcycles:

Note that the original WD40 is not a lubricant and shouldn’t be used to lube your chain.

It consists of a mix of lubricants, and the WD does stand for ‘Water Displacement’ but its other uses as a cleaner and protector are more prominent.

Now here are some of the most popular uses for GT85:

The fundamental difference between WD40 and GT85 is that GT85 will act as an efficient lubricant more so than WD40.

Aside from this, the two products are very similar in their uses; they are mainly suitable for cleaning and removing residue, dirt and other build-up and then protecting the bikes various parts from it.

What is the difference in the formulas?

The crucial difference between the two formulas is that GT85 contains PTFE and WD40 does not.

GT85, as a result, is a much thinner, more slippery liquid.

The thinner liquid can get into trickier spots and into even the tightest bolt threads to loosen them. Because it is incredibly slippery, it is faster acting than WD40.

GT85 is also inclusive of lavender oil, making it a pleasant smelling product to use.

The question you have all been waiting for.

Well, it isn’t as simple as stating that one is better than the other, unfortunately.

It may be worth telling you at this point that GT85 is actually owned and produced by WD40.

Further, the addition of PTFE in GT85 makes it a slightly different product to WD40 that can fulfil other needs such as chain lubrication.

So GT85 is primarily a lubricant with properties that make it useful for other tasks, but WD40 is mainly a good water displacement agent that can penetrate oil and residue, which has some lubrication properties.

In terms of a protectant, WD40 is very good at looking after your chrome and metals, keeping them safe from water intrusion, rust and corrosion.

GT85 has protective properties, but as a thinner material, it isn’t as long-lasting as WD40.

As it is such a thin lubricant, you may find it needs re-applying more often than a specialised chain lube/wax.

WD40 remains wet for much longer and will take more work to rub in/rub off as required because it is a thicker material.

As much as the two products are similar in many respects, they are different horses for different courses.

If you are looking for a lubricant with the ability to clean, remove and protect, then GT85 should be your go-to.

If you are looking for a cleaner, remover and protector that can lubricate to loosen things up, then WD40 is the way to go.

It isn’t often you will find me sitting on the fence about anything but in this case, grab yourself a can of both and use each one for its properties that best suit your needs.