Sometimes finding the right gear can be tricky. It happens to the best of us – especially in traffic on a new machine.

Often it’s quicker and safer to be able to look at a display. We’ve recently been giving props to manufacturers like Mash for including a gear indicator on all their models.

Well, there is a way to retrofit a digital gear indicator to a bike designed without one. And it’s significantly less hassle than I would have assumed.

Rather than going through the gearbox for a mechanical read, these indicators use the electronic control unit (ECU) to tell the gear.

If you’re riding a reasonably common bike from a major manufacturer, it will likely be as simple as fitting a plug-and-play option.

Let’s dive into your options. This is a large, bright display that automatically adjusts to lighting conditions. It installs on any machine that uses speed signals and a tachometer and is pretty hassle-free.

There’s some setup, but this only needs to be done once.

The included connector is designed to fit models from major manufacturers. If your bike is not supported, this connector can be cut off and wired directly by following the included instructions (this is slightly more involved). 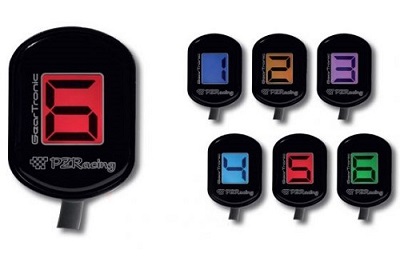 This black anodised gear indicator is perfect if you want to keep track of gears without adding a large dial to your display setup.

Its LCD touchscreen is small enough that it’s barely noticeable. But the customizable display is bright enough to see in all conditions.

Installation is pretty easy too.

In most cases, this is as simple as attaching to the original connectors on your bike. Like the Starlane model, it uses readings from the tacho to display the gear. This is a good solution for people trying to keep it minimal. 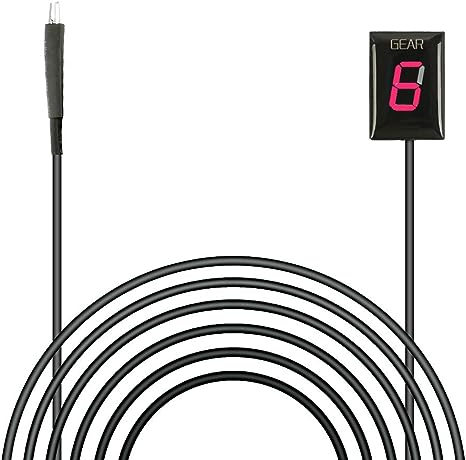 This is a hassle-free gear indicator solution for use with all EFI Honda models from 2003-2019.

It reads the ECU data from the bike to indicate the gear on a bright display. Connection is fairly simple if your bike is supported – no need to cut wires, etc.

As far as mounting the unit goes, it’s supplied with some zip ties and an adhesive pad. The sticky pad is unlikely to be of use to anyone. Cable ties can secure the unit in place but perhaps in not the most optimal way.

This is our only complaint here. The unit is cheap and works well but you’ll need to figure some way to permanently fix it to your display.

Why A Gear Indicator?

In unfamiliar or high-stress situations, it can be hard to know what gear you’re in.

Some people will experience this when they take their bikes to the track. Here they may notice it takes them a frustrating amount of time in the braking zone to figure out where their gearing is at.

Others might find that when traffic is busy or some other factor introduces stress, it’s hard to keep track of gears. A bright display showing the gear helps with this immensely.

Read how to change gear on a motorcycle

I had assumed installing a gear indicator was a bigger deal than it actually is.

Almost every bike has a neutral light, which occasionally stops working. I’ve had this fail before in one of two ways and it conditioned me to expect the worst.

Either the LED needs replacing (simple), or the cable and attachments that lead down into the gearbox to take a read have some issue (not so simple).

The gear indicators on our list aren’t nearly as fiddly as this setup and don’t rely on mechanical readings from the gearbox at all.

Instead, they take a reading from your onboard computer (the ECU is technically a computer), making a retrofit possible in many cases. Find a gear indicator that supports your machine and this will be a plug-and-play experience.

Only the indicator from Idea advertises itself as waterproof. And even then, it fails to indicate a rating.

The Starlane solution states that it’s “water-resistant” and the PZ Racing one doesn’t mention it all.

I’m assuming it’s just a given that these things work in all weather. I can confirm from scouring multiple customer reviews that the Idea kit held up through an entire winter.