10 Of The Best Maxi Scooters (For Touring and City)

The maxi-scooter has been around since the late 1990s. And that first wave was looked on with scorn by some motorcyclists, confused by what companies like Honda, Suzuki, and Yamaha were offering.

But the Japanese public wanted a scooter that could handle motorways, had enough storage for a weekly shop, used bodywork that offered some weather protection and was comfortable for long rides.

And though the western market was confused at first, they quickly realised a twist-and-go option with the power and comfort of a cruiser was something they wanted too.

We’ve made a list of some of the top choices in the UK for your perusal. 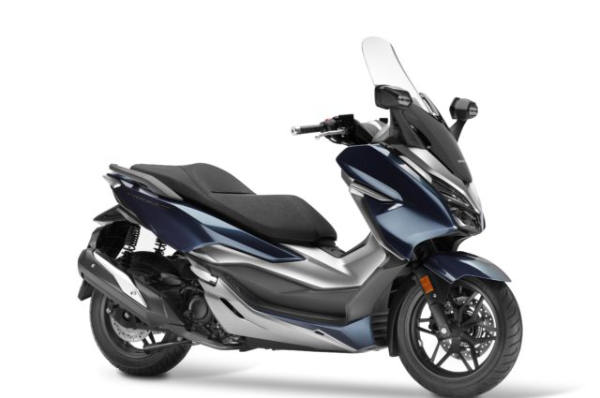 The NSS 300 Forza from Honda is a practical, reliable bike from a company known for practicality and reliability.

Its 279 cc single-cylinder engine has enough power for the motorway and performs well at low speeds in and out of city traffic. The storage has been improved over the previous generation by moving the battery placement. But, at 53.5l, it isn’t up there with more touring-type maxis in terms of storage space.

The previous incarnations of this series already had a reputation for good handling. And this time around, Honda have shortened the wheelbase and dropped a little weight, making the bike feel at home in city traffic as well as the open road.

It’s also full-featured, with traction control, keyless ignition and an optional top box to up the storage capacity. 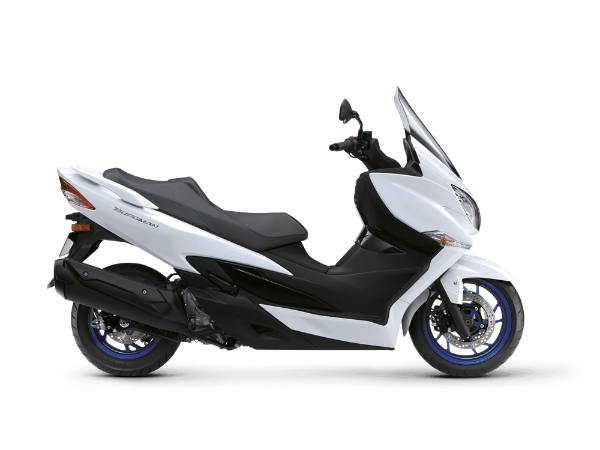 These maxis are known for their comfortable seats and ample storage space. The rear mono-shock may also play a role in this reputation for comfort. Most scooters use a basic twin shock setup that’s not nearly as effective.

We like the seating position on this one. The focus is mostly on comfort, but not so much that it handles poorly in traffic.

The reputation for storage is well-deserved too. There’s plenty of room for touring gear under here, and with a top box, two people’s stuff could be packed away neatly. We like the little things – like the integrated power socket in the glove compartment and the clear instrument layout.

Suzuki make some of the finest two-wheelers on earth and they appear to have struck gold with this. The Burgman is exactly what a lot of people are looking for in a maxi – power and handling but with the ease of a twist-and-go. 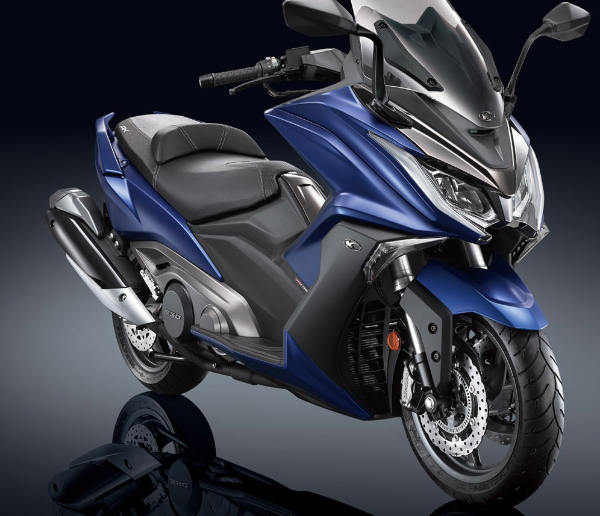 Taiwan’s Kymco have quietly been making an international reputation over the years that’s slowly catching up to their domestic one.

At home, they primarily focus on low-displacement scooters for high-density urban riding but recently have started to offer these maxi-type scooters that are competing with big hitters like Honda, Yamaha, and BMW. The AK550 is one such and the verdict so far is that it’s a solid machine.

It mightn’t have the same power as a BMW with the same displacement, for example. But it performs well on motorways and in cities alike. Taiwan has a reputation for cutting-edge tech and this bike includes a few idiosyncratic touches. An integrated, proprietary smartphone connection, adjustable screen and heated grips come as standard. The stock model has ample storage too. 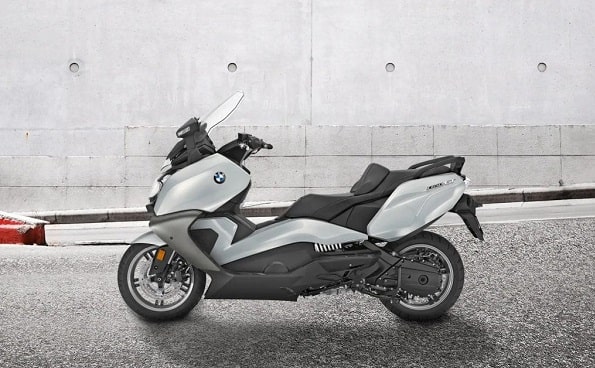 Anyone who’s ridden one will say the same thing – BMW’s C650GT sounds amazing. It’s as powerful (and expensive) as many high-end geared bikes, so some people don’t understand the appeal. We do. These are big, powerful, luxury twist-and-go machines which are user-friendly and suited to touring.

It’s a full, luxury, BMW experience with the kind of comfort, performance and little touches that their cars are known for. The electrically adjusted windscreen and blind spot alert features are nice and some clutch adjustment from previous models mean these things have great acceleration at low speeds – uncommon in maxi scooters.

In addition to ABS, the C650 uses an ASC – or automatic stability control. This feature limits the amount of torque transmitted according to conditions – stopping your wheel from spinning on a wet surface, for example. 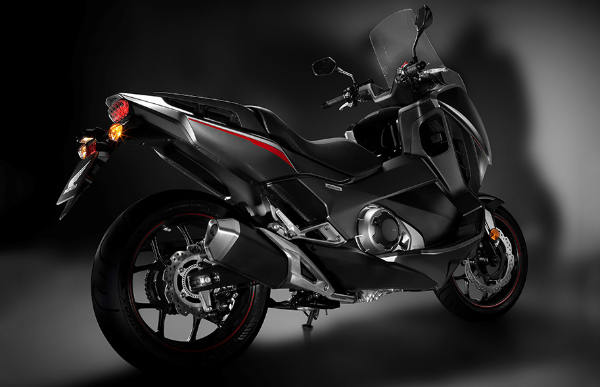 This is Honda’s full-fat maxi scooter. With its large engine and decent storage, it might look like it’s geared exclusively towards touring. But this performs well in the city thanks to its various drive modes. It feels powerful on the motorway in Sport mode and nimble and under control in the city in Drive mode.

A comfortable riding position, SDBV front brakes and easily adjustable rear preload adjustment mean this is a smooth ride for rider and passenger. Touring on this machine is a real possibility and there’s enough room for two people’s gear to fit with a top box.

It’s considered a bit of a hybrid because its look and because it can be switched into full manual mode – with gear shifts taken care of by switches on the left handlebar. 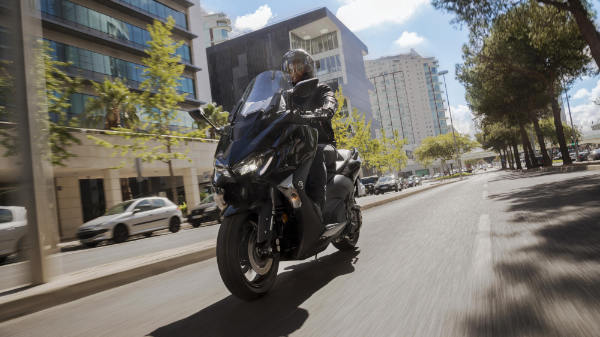 The TMax is wildly popular in Asia and has a dedicated following in the west these days too. The reason seems pretty simple. These are fun to drive. In fact, they’re the reason many people became interested in maxi-scooters in the first place. They aren’t necessarily the most suited to touring, having mid-tier storage capacity but they are light for how much power they have and feel nimble and fast.

These have been around a while and are a tried-and-tested maxi. The latest model has cruise control, heated grips, traction control and an adjustable windscreen.

The T-Max is definitely less of a step-through type scooter, leaving a small space for the footbed and more aluminium frame running through the middle of the bike. This makes it feel stiff and sporty but leaves your feet with a little less weather protection than a typical scooter. 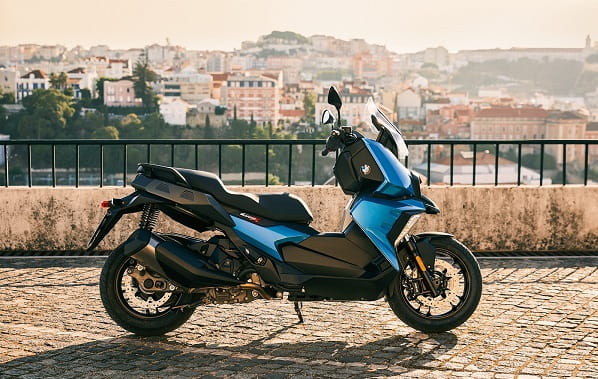 As well as a lower displacement engine, the C400X is a little more compact overall than its other mid-sized rivals. With this shorter wheelbase and lighter frame, there is plenty of acceleration here for urban and suburban riding. Country lanes, heavy traffic and narrow alleyways are all easy work. This is the most nimble and best handling scooter on our list.

Storage was not priority number one in the design process but you can fit a full-face helmet under the seat at a pinch. It’s mostly focused on urban and suburban riding but is comfortable enough for the occasional longer ride.

Connectivity was a focus with an integrated power outlet and charging compartment. BMW Motorrad connectivity is supported and the bright TFT screen is easy to use and sync with your devices. 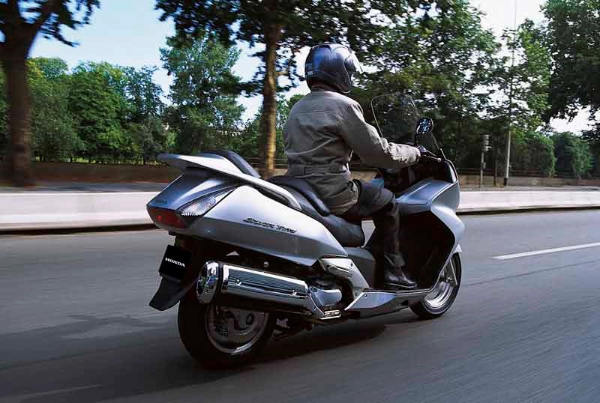 Honda’s FJS600 Silverwing was a much-loved maxi in the UK and though they’re now discontinued, they’re still a common sight on the used market. We think they’re worth considering for a few reasons.

Honda was specifically taking aim at some of the other heavy-hitters in the maxi class and kitted the Silverwing out to be more comfortable, faster, and more fuel-efficient than maxi scooters from Yamaha and Suzuki. A 582 cc engine delivers 50hp and means this machine can eat up the motorway. Linked brakes and surprisingly steep lean angles mean this is nimble and reliable in addition to being powerful.

We get it – maxi scooters aren’t for everyone.

But we can see why the comfort and convenience of a maxi make so much sense to some people.

They also make an excellent choice for anyone with mobility issues that might make gear-shifting difficult or people who find manual transmission intimidating.