8 Of The Best Electric Dirt Bikes For Moto Cross Adventures

Dirt and trials bikes were amongst the first to make the transition to electric power. The instant acceleration and lightweight frames offered by electric bike technology were a perfect fit for activities where torque and low weight are everything.

The upside to this early adoption of electric tech means the dirt/trials bike market now offers some decent value propositions (many on their 3rd or 4th iteration) and some cutting edge powerhouses for those with the money.

Let’s dive into our top picks 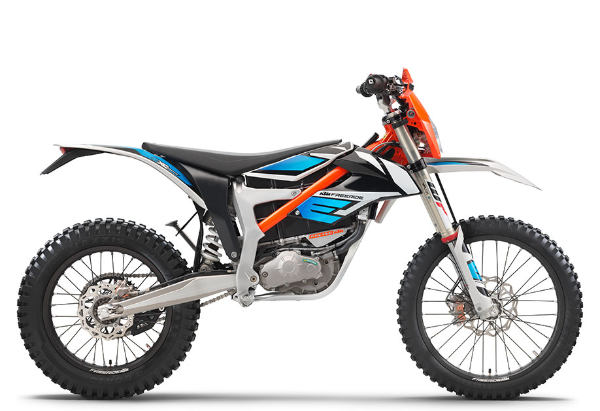 If you’re curious about the electric dirt bike experience but are put off by the relatively unknown names in the industry, this offering from well-established combustion dirt bike manufacturer KTM might feel like a safer bet.

It features three riding modes, economy, enduro, and cross, with the power output and range scaling for each one. This year’s model increases battery capacity by 50% and uses regenerative braking to extend the range even further.

A water-cooled engine unit means the Freeride will perform under even the harshest conditions and its two-part steel and aluminium chassis with adjustable suspension can take the kind of beating enduro and cross are bound to throw at it.

Both visually and in terms of what it’s capable of, this really seems like a regular dirt bike. Though, of course, it’s whisper-quiet like every other electric. It’s not cheap but the Freeride is a premium electric dirt bike from a well-known name. Requires a 220V outlet. 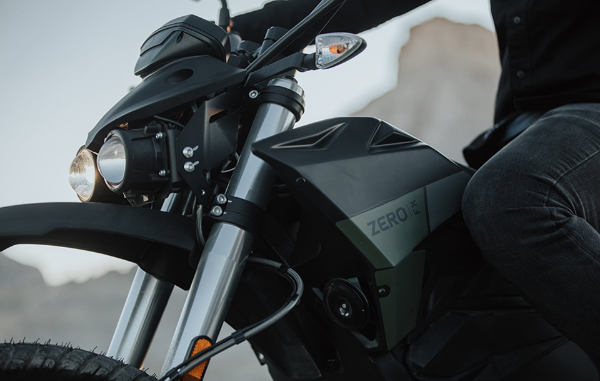 The Zero FX from Zero Motorcycles uses their Z-Force passive, air-cooled engine to reach speeds of 85mph with minimal noise. It uses a brushless motor for reduced friction and regenerative braking technology to put some juice back in the battery as you ride.

Like many of the bikes on our list, the Zero FX uses an ECU (electronic control unit) auto-adjust acceleration in place of gears and a clutch.

How much torque depends on the setting you have selected. The Zero Motorcycles app also allows you to fine-tune performance.

Given its top speed of 85mph and its impressive 106NM of torque, it’s a pleasant surprise that the Zero FX will charge from a standard 110V household outlet.

This is a full-fat, high-octane experience, and it’s probably worth mentioning that going clutchless electric doesn’t make this any more of a beginner experience.

There’s plenty of power here to launch the experienced over steep obstacles but also to land the unwary in a hospital bed. Electric bikes like this are real bikes. 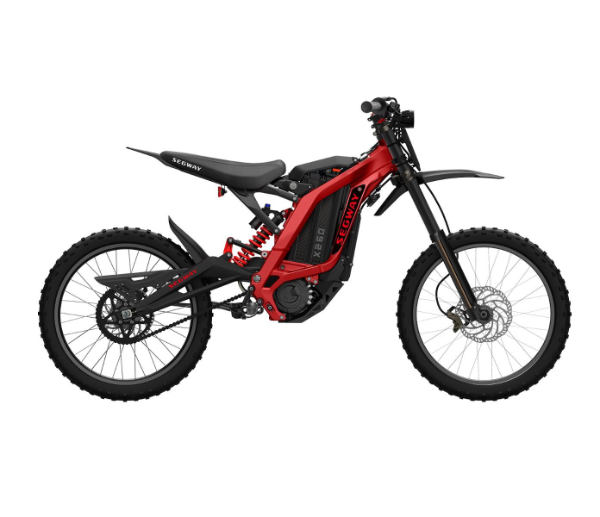 Segway first came to attention more than a decade ago when they launched a walking replacement device into a market already suffering from the highest rates of obesity in the western world.

Thankfully, that didn’t catch on, and the company have since diverted funding to mobility solutions that actually add something to consumer’s lives.

The X160 and its more powerful cousin the X260 come in at half the weight of a traditional dirt bike with the kind of torque and acceleration rarely seen in anything but the highest-end, combustion dirt bikes.

Using aviation-grade aluminium, Segway has made a durable, lightweight frame. Multi-link hydraulics in the rear and an inverted, double shoulder front fork can both be adjusted to dial in a smooth ride on any terrain.

Segway’s dual-drive system means both the front and rear wheel have power. This can take some getting used to for riders with a lot of experience on more traditional machines but in the hands of those who’ve gotten used to it – the dual-wheel drive is capable of some crazy off-roading.

Two power modes ensure the power is there when you need it but you aren’t draining the battery on easy terrain either.

Again, for those curious about the electric bike phenomenon who’d rather stick to a household name, either Segway’s X160 or X260 may be an attractive option. 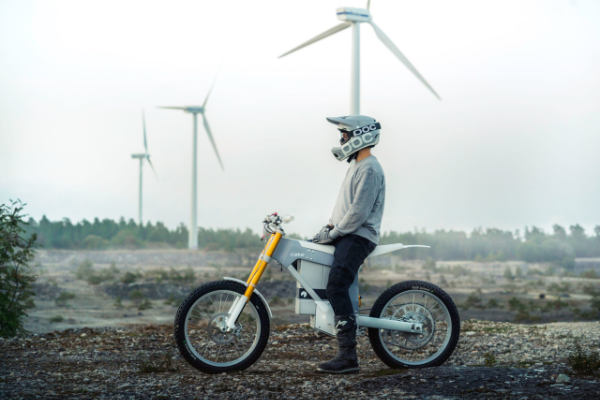 Sweden’s Cake Kalk OR might be the most visually striking of all the options on our list.

It probably isn’t for everyone but we love the way it’s thrown any attempt to look like a “real” bike out the window and gone for some kind of retro-futuristic space-scrambler instead.

Three power options range from standard for flat ground stuff, excite for trail riding and excel for max power and torque. A quick-charge feature will get you up to 80% in 90 minutes and a full charge takes around 3 hours.

24 inch, lace-up wheels, and a huge rear sprocket complete the bizarre and beautiful aesthetics of this Swedish creation.

Not for everyone, but the Kalk OR has the potential to be a future classic with its retro-future looks and decent torque and acceleration. 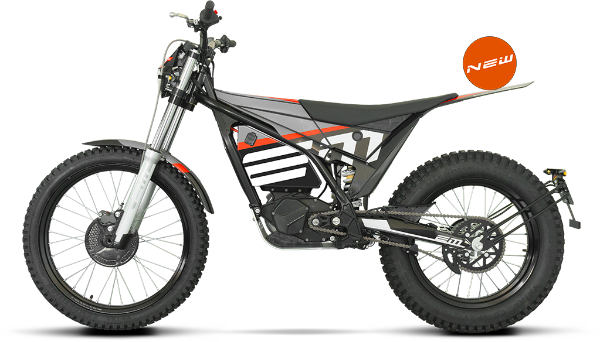 These have been a popular option in the UK for a couple of years now and the recent iteration has increased both torque and range over its predecessors.

Regenerative braking helps to extend range, going some way towards recharging the battery when the brakes are applied.

The weight has also been reduced over previous models, further increasing this machine’s torque and the distance it can travel off a single charge.

The Escape uses a brushless 40AH battery to offer a nimble and fun ride on a variety of terrain.

This French company has been producing electric dirt bikes for several years now and the verdict is generally very positive. The latest iteration of the Escape comes in three forms, the lite, the sport, and the race, with this final model offering an adaptive clutch for even more fine control.

All of these latest models offer an improved range over previous examples.

Given their relatively lower price tags, we can see the appeal of these machines in the current electric dirt bike market.

The Escape Lite model makes the most sense for average riders with its lower price point and functional seat. There are plenty of videos online of people throwing these at very challenging terrain and the bike seems to hold up well. 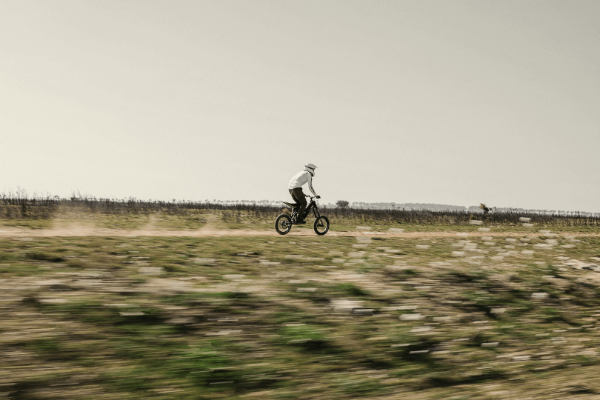 Interestingly, most of this bike’s components (wheels, handlebars, brakes, tyres, etc) are sourced from high-end mountain bikes, not from motorcycle parts. Makes sense when you think about it – the weight is more comparable to a bicycle than a traditional MX bike and it’s designed to ride over the same kind of terrain.

Its 22.2AH lithium-ion battery powers a brushless 8kW engine (about 11bhp) for a smooth and quiet experience with plenty of torque.

Expect about an hour of ride time before a recharge. Thankfully, this supports the quick-charge feature present in many models and can get you an 80% charge in about 90 minutes. A full two hours will get you back to max capacity. The Freerider can connect to any domestic power outlet.

The mountain bike brakes and suspension do an excellent job at making this feel like what it is – an unholy and wonderful combination of dirt bike and mountain bike.

The delivery of power feels smooth and direct, and in combo with the overall lightness of this machine, makes for a ride as scary as you’re up for.

There’s definitely enough torque here to launch you off some kickers and the suspension and brakes are good enough that it still feels like a good idea when you land. An 8kW and a 12kW model are available. 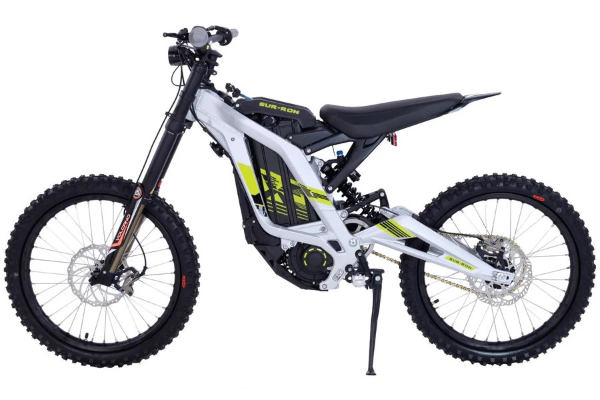 Using a Panasonic battery and a lightweight aluminium frame, Sur Ron has created a stunning looking electric bike with a well-rounded feature set.

The range will depend on how hard you push the bike but it’s certainly decent compared to the competition.

Full-size wheels, a Killah RST fork up front and a rear shock with 8” of travel mean this is capable in even the heavy terrain.

This is a simple, fairly inexpensive machine that will probably develop a loyal fan base of tinkerers over the years, but making it fully road-legal could be a problem.

These bikes have carved out their own niche as a blend of a mountain bike and low displacement EV, off-roader. The looks and modest power output might not be for everyone but these are worth a look for those new to the market. 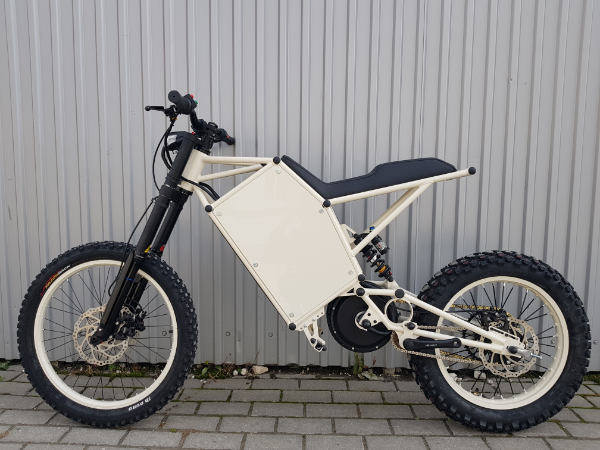 The Vector Vortex might sound like a one-liner from classic 1970’s spoof comedy, Airplane, but for a machine that can be ridden as a road-legal bicycle, it’s a surprisingly fun electric dirt bike.

Regenerative braking gets you back up to 30% of your battery capacity and an estimated 600 charge cycles will reduce that battery’s capacity by only 20%, meaning this is a solid investment for year’s of riding.

At only 59kg, attaching a set of pedals and riding this the old-fashioned way is a real possibility. And, as long as you restrict it to 15mph through the app, this bike is legal on the road (depending on where you live).

Despite its legal status, this machine is built to be fired at steep hills, launched over kickers and ridden hard off-road.

Using front and rear suspension similar to a typical dirt bike with a lightweight frame, its limited power is more than enough to tackle the kind of terrain associated with dirt bikes of traditional, internal combustion construction.

A direct chain connection between the motor and rear wheel creates a unique sense of control and allows for additional battery regeneration through engine braking. This drive train efficiency may partially explain the whopping 62km+ range of this unusual machine.

These bikes have a following already with a community of hackers and modders already getting the most out of their units.