How To Pass Your Module 2 Bike Test

Firstly, if you are reading this having passed your Module 1 bike test, congratulations.

According to many people who’ve been through it all before you, you have just got the toughest part of the motorcycle test rigmarole out of the way, and having personally just gone through both Mod1 and Mod2 tests, I would have to agree.

My reckoning behind that wildly unconfirmable statement?

The Mod1 test is a motorcyle test carried out on a closed circuit.

An environment where you will likely never ride a motorcycle again.

It is difficult to practise for in your own time, and feels unnatural and often unnerving whilst you’re ‘inside the fence’.

Module 2 on the other hand takes place on the open roads.

The very same open roads which, (if you don’t stuff up the next 40-50 minutes of riding under examination!) you will spend the rest of your motorcycle riding days enjoying.

A much more natural environment to find yourself in.

So with the right preparation, the Mod2 should be little more than a short ride around familiar roads with a slightly stern riding companion.

So without further ado, here’s my thoughts on how to pass your Module 2 motorbike test.

As with both CBT, and Mod1 tests, a strong breakfast, and strong clothing (not jeans and trainers) is always a good idea – shows you are taking things seriously!

On top of that, leaving home without the correct documents will mean you will be returning disappointed.

Without them you are going nowhere.

Personally, I took a day’s training with a driving school the day before my Mod2.

Because I had been advised that it was the right route to take by the people who know.

But also to get my head around the roads I would riding on under test conditions.

Have a look at the extensive list of reputable training schools here on Begin Motorcycling and get in touch with a school near you.

You can book your test on the official DVLA site here.

There are likely to be one ore two test centres reasonably close to where you live.

Which one you end up taking your test at will usually be dictated by available test slots rather than personal preference.

Myself, I ended up at Erith test centre in South London.

I had never even been near it before, let alone ridden a motorcycle round it.

Getting my bearings while in the company of an instructor who could point out the common pitfalls and test routes felt like a sensible thing to do.

It is essentially made up of 4 elements.

The first two elements of the test you will get out of the way before you even sit on the motorcycle.

Show me, Tell me

With that out of the way you will be wired up with a one way radio, (like in your lessons if you took them) and then it’s ride time.

Watch your speed both in the test centre and on the surrounding roads.They are often on industrial estates, with 20-30mph limits. 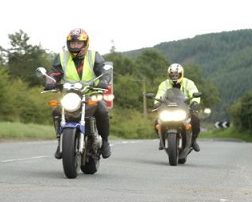 Apparently a decent chunk of people fail their tests on the way back to the centre at the end of their test. Relaxing, and breaking the speed limit.

Avoid daft mistakes like that, keep your head in the game until you are off the bike.

I cannot imagine how gutting that would be. Like dropping your birthday cake after blowing out the candles.

Avoiding errors like that is why a day of riding in the area with an instructor really helped me out.

Sure, if you are going to pass your test you should be able to adapt to any road, familiar or otherwise.

But under test conditions and with the mandatory nerves it really did help me knowing that there was a cheeky 20mph zone round that there corner.

Out on the roads the Module 2 motorcycle test ride will be broken up into two chunks;

Essentially in the ‘independent riding’ section, the examiner will give you directions based on place names.

It is then up to you to follow signs to determine your next turn.

I suppose this is to check that you can multitask enough to maintain safe riding while trying to figure out where to go.

Which, if you are anything like me, is how you will spend a decent amount of time while on a motorcycle!

This is much more ‘classic’ driving test. “Turn left at the next junction please” is something you can expect to hear more than twice.

A big part of this section of the Mod2 test is ascertaining whether or not you can continue to make safe progress on a motorcycle on public roads.

I picked up a couple of minors here.

I was over cautious (test nerves) and came to a complete stop at junctions which I could have rolled slowly through, making shoulder and mirror checks as I went – ‘Undue hesitation’.

Fair enough really, the risk of being rear ended on a motorcycle is arguably higher than in a car, and higher still at a junction.

Getting clear of those bad boys as neatly and efficiently as possible is in everybody’s best interest.

From my mate Simon at London Motorcycle Training; It doesn’t matter if you go wrong direction wise in either the independent or road riding sections of the test.. A wrong turn is not even close to a fail. Just commit to your action, and carry it out safely.

If you can’t hear the examiner, or you miss the sign for whatever reason, just pick a route and stick to it.

The examiner is testing you on your ability to ride safely, not whether you can get yourself to the nearest Asda.

So shoulder check like your head is loose, and use the mirrors like Kim Kardashian on a good hair day.

That being said, having to constantly bring you back to the test route after another wrong turn probably won’t put the examiner in the best frame of mind.

It’s a good idea to listen carefully and get the directions right..

Just don’t fill your lid with sweat if you make a wrong turn.

There will be a few more concrete elements to your Module 2 motorcycle test.

Manoeuvres you will be tested on will be;

My hill start was an absolute beauty, but what I learnt from practice was more useful than the clutch control.

The spot that the examiners tend to test hill starts at the Erith test centre is on a long sweeping left hand bend.

Simon’s tip; you can actually see more of the road behind in the left hand (pavement side) mirror than you can the right. It’s true.

Use whatever tools you have at your disposal to make your observations as thorough as possible.

Gather the most information you can to make the right choice about your next move. Even if it means looking in the ‘wrong’ mirror.

Back To The Test Centre

The test time will absolutely fly by, I couldn’t quite believe when we got back to the centre that it was over.

You will park up the bike, (just whack it facing forward in the bay, no point in making life more complicated at this point) and have a rather nerve racking wait in the centre while the examiner fills out your test sheet.

You will then be called into the office and given some pretty great news.

You’ve passed. Nice one. I knew you would.

Now the real learning can begin. Ride safe and enjoy!