My Motorbike Won’t Start: What Should I Check?

We’ve all been there. You go to bed thinking everything is OK with the world then wake up the next morning and your motorcycle won’t start.

We’ve made a list of a couple of things you should check before you give in to despair.

If you’ve already diagnosed the problem you might want to try jump-starting your motorcycle, a portable jump starter will come in handy for this.

Starting vs Turning Over

A mechanic will typically describe your bike’s issue as “not cranking/turning over” or “not starting”.

This is important – if the starter motor sounds like it’s turning over, as usual, your issue is probably the battery.

If the engine cranks but doesn’t start, it could be having trouble producing a spark, getting fuel, or creating compression.

Without wanting to patronise, the simple things should be checked first. Even the most experienced rider can have a brain freeze and miss the obvious…

Visually inspect the battery first. Bulges, cracks, leaks, discolouration, or a broken terminal can all be diagnosed by looking. If it looks good, then it’s time to check the battery in more depth.

If you don’t have any tools to hand, the easiest (but not the most accurate) way to see if your battery is OK is to either turn on your lights or sound the horn. Some bikes won’t let you use the lights until the engine is running but the horn should work. If it sounds weak or changes tone or pitch, it’s usually a sign that the battery is dying.

The best way to accurately test your battery is to use a multimeter. This is a useful tool around the house too. A decent, generic one can be had cheaply on Amazon.

Note: Make sure you test your battery after the bike has been sitting. Otherwise, you won’t get an accurate reading.

Check out this article on the best motorcycle battery chargers.

If you’ve ruled out the battery move onto these troubleshooting steps. 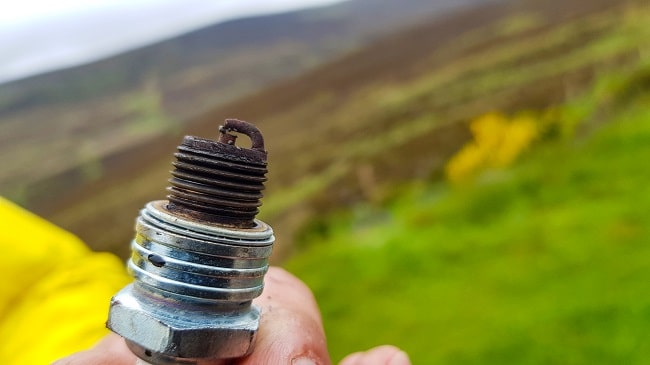 The fuel valve, or petcock valve, on older motorcycles, has an on, off, and reserve setting.

There were a few reasons for this, the most important being that gravity could continue to feed fuel to the carburettor (the tank is higher than the carb), eventually flooding and causing problems.

When leaving bikes like these sitting, the valve needs to be put in the “off” setting for safety. Check this if you’re on an older bike. It’s usually under the tank on the left side.

Fuel injection systems have made this obsolete, so your bike may not have one.

Check the main fuse on the motorbike, if it is blown, nothing electrical will work.

It’s also possible to have a faulty fuse that works but keeps your bike from running at 100%. This can be the cause of seemingly random cutouts and patchy periods of things not working properly.

Keeping a spare fuse with the bike is not a bad idea, as they are cheap and easy to swap out.

If the fuse keeps blowing, it’s a clear sign that the electrical system is being overtaxed. This might be a result of too many accessories drawing power or some faulty wiring that needs fixing.

This can yield similar problems to a sketchy fuse, with things working intermittently then failing.

Check your manual to find out where all the ground points are on your bike and check if they’re all connected correctly.

If you’ve recently taken your bike apart, done some custom work, or resprayed the frame, it’s not uncommon for ground points to get messed up. They need to be a clean metal-on-metal connection to work correctly and be safe.

Well, we’ve probably missed something. To be fair, the number of problems tends to increase with the age of the bike.

If you’re new to riding, buying a bike that’s both modern and fairly simple will help you learn the basics as you go, and check out this article for some basic motorcycle maintenance pointers.