10 Of The Best 50cc Scooters: Practical and Economical Runarounds

Whether you want to start with a smaller engine to build confidence, are too young to get insured on anything larger, or want a local runaround, 50cc scooters these days aren’t quite as underpowered and awkward-looking as they once were.

We’ve made a list of some of the best models available right now.

Let’s dive into our top picks 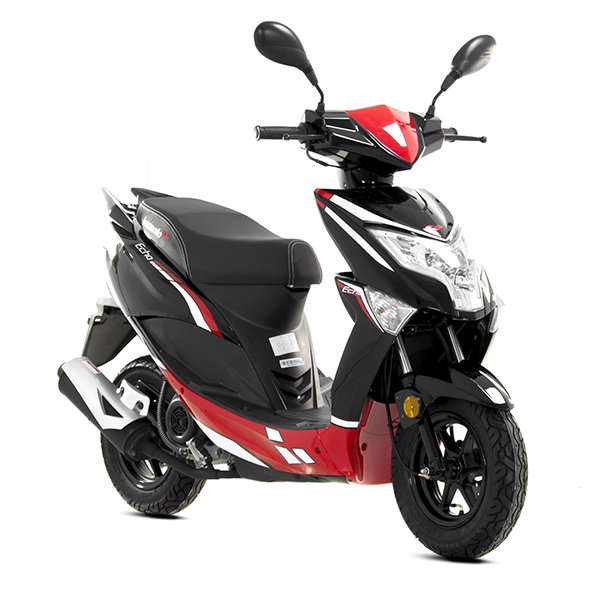 Lexmoto has established itself as an entry-level, first-timer brand in the UK over the last few years with a good reputation for customer service and reliability. This a stripped-down, lightweight, little runaround with good fuel efficiency and decent looks.

The Echo 50 isn’t a very original design, depending instead on the lines and curves that have been seen for several decades on more established brands. This isn’t a criticism. They’ve looked at what the market tends towards and gone for a style with maximum appeal.

Not quite our cup of tea, personally, but the reviews are really good on what is one of the most budget-friendly scooters out there. 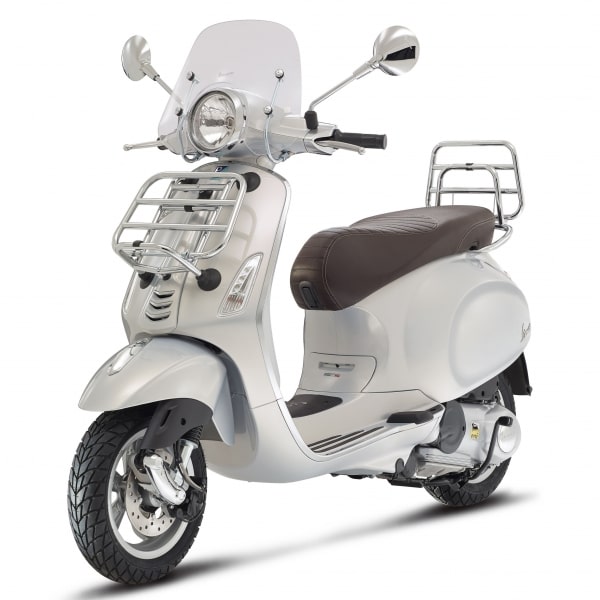 Credited in part with the rise of low displacement scooters in the 1960s, Vespa continues to make retro-styled machines that take full advantage of modern mechanical engineering.

This is essentially a smaller version of their GTS model and uses the same minimal, sleek lines as that scooter. Its 4 stroke engine isn’t as zippy as some others on our list but that’s not why most people buy a Vespa.

It is reliable and smooth with good handling and a comfortable riding position.

Despite its small overall footprint, the Primavera has better storage than we expected. There’s certainly enough space for a trip to the gym or supermarket, though not as much as some of the larger models on our list.

A range of colour options, a killer design and the Vespa badge suggest this is aimed at the style-conscious. That’s not to say there are any mechanical problems to report here.

The Primavera is a beautifully-built classic with decades of engineering and design behind it. 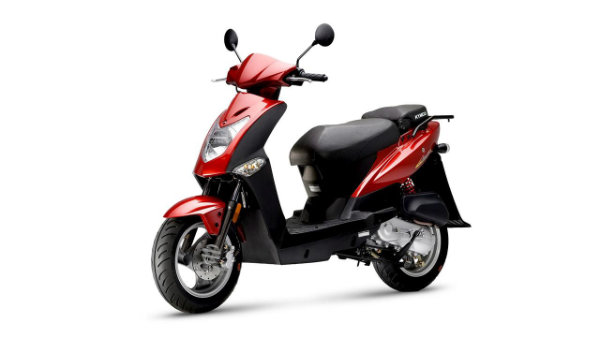 Kymco’s European reputation has been on the rise in recent years, thanks in part to BMW and Kawasaki’s licensing some of their manufacturing to Kymco’s Taiwanese factories.

These are priced low compared to their Japanese counterparts but priced a little above a typical Chinese motorbike. Kymco has a lot of experience making low-displacement scooters for the domestic market and the Agility is the cheapest of their three 50cc scooter models.

It’s definitely a no-frills light commuter but the build quality and performance are surprisingly decent.

This is a good fit for someone on a budget who doesn’t want to scrape the barrel for the cheapest, potentially unreliable scooters.

If you want something with more features and classic appeal, the retro-inspired Like 50 from Kymco might be more your style. 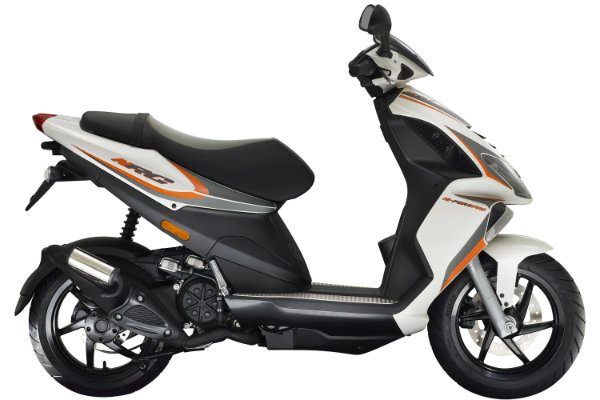 This is Piaggo’s entry into the “sports scooter” category, taking on the likes of Yamaha’s Aerox and Peugeot’s Speedfight. It comes in a little cheaper than those other two and with its front and rear disc brakes, 13in wheels and Euro4-compliant engine, it’s an attractive option at the price point.

A lightweight tubular steel frame helps with the sporty feeling, as does the 2 stroke engine and excellent, low centre of gravity seating position.

This looks the part too, fitting in somewhere between the Peugeot Speedfight and Yamaha’s offerings.

This is a personal preference, but we’re not sure it nails the aesthetic as well as the Speedfight. A solid, lively, and sporty-looking scooter for those after this kind of thing. 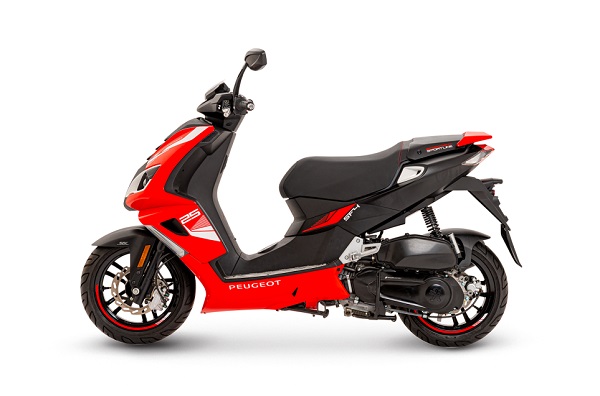 This has been one of the most popular 50cc scooters in the last decade, and it’s easy to see why.

The aesthetics appeal to the mostly young market scooters are aimed at, and the reliability and build quality of these bikes are well known.

New for 2021 is the 13-inch wheels, sharp styling and colourways, and digital LCD display.

It’s Euro 4 compliant, fuel-injected engine, this is a nippy little runaround with a decent sized fuel tank and storage.

The seating position, steering and shocks all feel right – cornering is fun and responsive. This is aimed at younger, sportier types and does a good job at delivering the right looks and a fun ride.

Note: This bike was also featured in our roundup of lightweight motorcycles. 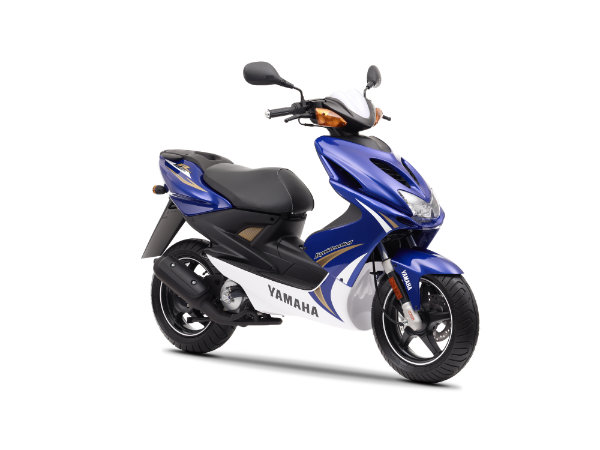 The Aerox R is probably as much fun as you’re going to have on a 50cc scooter these days. It’s lightweight chassis, telescopic front forks, and 13-inch wheels make for a responsive, easy-handling experience.

Yamaha has the kind of experience in the small scooter department needed to create these types of singular ideas.

The Aerox R is not a cheap machine but it’s a joy to look at and ride.

An impressive, liquid-cooled motor means smooth, reliable Yamaha performance – important for some people trying to squeeze everything they can from that 50cc.

We like the upswept tail and general shape and character of the bodywork. Previous generations of the Aerox didn’t have a pillion passenger seat. This time round a separate cushion is provided for the passenger. 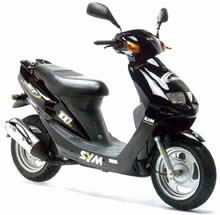 An almost ubiquitous sight in its home country of Taiwan, the Sym Jet is a no-frills commuter, priced to compete with smaller name Chinese brands but with all the hallmarks of Taiwanese manufacturing.

Sym’s early attempts at fuel injection from over a decade ago had some initial problems but by now, they have refined the art, creating a super-economical fuel injection system for this scooter.

These are known on their home turf for reliability and economy, and in the last decade the European market has caught on. Sym now has proper representation here in the UK and offers an extended warranty on their products.

The aesthetic of the Jet could be described as “conservative sporty”. It probably won’t win any prizes for its looks, but has good storage and offers decent protection against the elements.

If you’re after something more Vespa-inspired, check out Sym’s Fiddle model – also available in the UK as a 50cc.

Check it out on Sym Jet 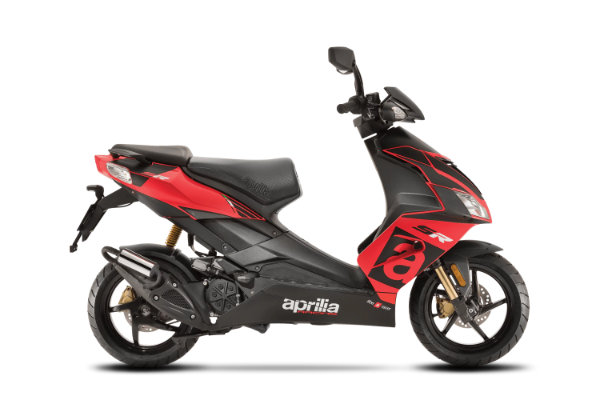 Aprilia is internationally renowned for its sporting success in the 70s, 80s, and 90s. And while they still do make lightweight sports bikes, their focus in recent years has become more general.

The SR 50 scooter feels like old-fashioned Aprilia in that it is singular in its vision and execution. It’s not easy to make a 50cc scooter look like it belongs in the same family as a track racing machine but that’s what is achieved here.

This doesn’t deviate too much from the last major redesign of the SR series in 2008 and keeps the integrated lamp and indicators with a wraparound front fairing that looks good and should keep you dry.

And it’s not only the looks that are sporty. For its size, the SR really does feel fun to ride, encouraging you to drop low into corners and accelerate out. If you must have the sportiest 50cc out there, it’s between this and the Piaggio NRG

Check it out on Aprilia 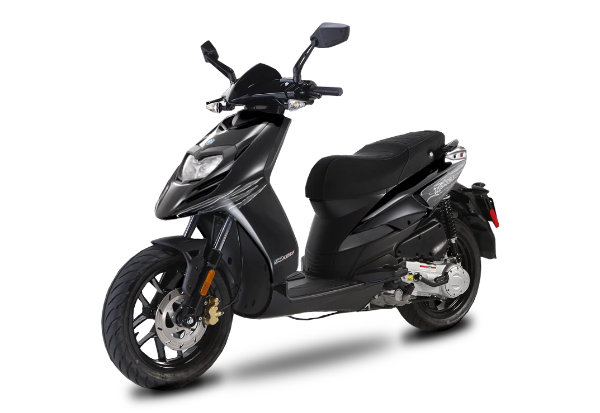 The Typhoon is a model that’s had about two decades of testing and iteration behind it. This is one of the first “rugged” style alternatives to the sports scooter look that became popular a while ago.

Rather than attempt to look fast and powerful, this style of bike went for chunky tyres, exposed frame, large wheel clearance, and negative space to create their look. It’s one we actually really like, and the Typhoon is one of the best examples (the old Yamaha BWS and Honda Zoomers are perhaps other contenders).

It’s a stylish and fun option, with a Euro 4 two-stroke single-cylinder producing a nippy, reliable ride. Underseat storage is pretty good here, and the Typhoon feels comfortable for its category, with a decent seat and comfortable riding position.

An attractive scooter at a reasonable price. 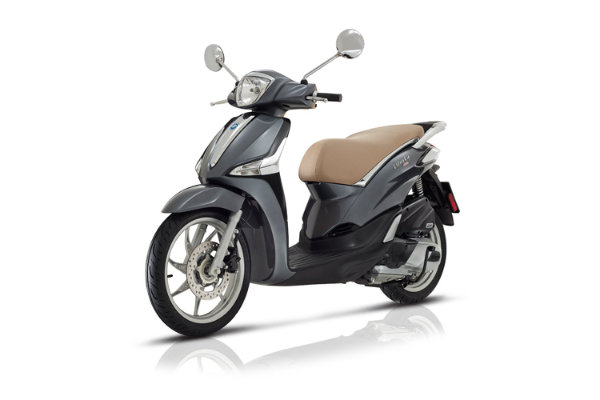 The Liberty is probably aimed more at more mature riders who want a small displacement backup for short hops.

It doesn’t use any of the sporty or brightly-coloured paintworks of the more youth-oriented models and goes for a cleaner, more classic look.

We like the large 16in front and 14in rear wheels that add a level of stability to this ride not present in the other options.

An integrated USB socket for charging your phone on the go is also a nice touch.

This makes sense for a commuter looking for a more modest, professional-looking scooter.

The 50cc market has got quite a bit more depth to it than we thought, both in terms of price range and variety. We’ve covered something to suit every budget here and hopefully something suitable to your low-displacement commuter needs.

If you want more power check out our roundup of the best 125cc scooters, the best maxi sccoters and the best electric mopeds.

Also, read about the differences between mopeds and scooters and how fast does a 50cc scooter go?